Not So Dire Straits? Shocks, Shale and Sanctions

Home Our Blog Not So Dire Straits? Shocks, Shale and Sanctions
Share this page

Last Friday the illegal seizure of a British flag-bearing oil tanker in the Strait of Hormuz by Iran’s Revolutionary Guard Corps, followed weeks of ratcheting tensions between Iran and the West. The seizure of the Stena Impero was in retaliation to the capture of an Iranian ship headed to Syria by British forces in Gibraltar, enforcing EU sanctions against Syria.

The Strait of Hormuz occupies a position of strategic importance for the world’s energy sector, with 21 million barrels per day flowing through it to markets globally; representing over 20% of global crude oil supplies. Clearly, any impediment to the transit of oil through the Strait has the potential to cause widespread disruption.

The deteriorating relations between Iran and the West restarted last year when the United States withdrew its support for the Joint Comprehensive Plan of Action (JCPOA), also referred to as the Iran nuclear deal. Essentially, Donald Trump called this a very bad deal for the developed world and he re-imposed crippling economic sanctions against the Iranian regime.

Political antagonism in the Middle East is not a new phenomenon with several painful incidents of disruption to supplies leading to aggressive surges in the price of oil, as displayed below.

However, this time the price reaction to the current crisis has been subdued. At the time of writing both the West Texas Intermediate and Brent Crude oil price benchmarks have risen by just 3%. This is extremely positive because we know that a strong relationship between rising oil prices and the rate of inflation exists. This relationship has plagued developed economies entirely dependent on oil – see chart for relationship between oil price surges and inflation (as measured by CPI) spiking. 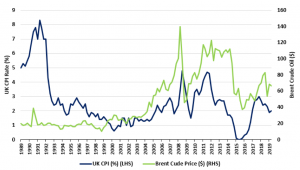 One key reason why the price has risen only slightly is a change that has already taken place between the dynamics of supply and demand for oil.

On the demand side oil consumption has waned, with the first quarter of 2019 registering the slowest growth since 2011. This reflects weakening global economic growth which has a particularly harmful effect on demand for transport fuels.

On the supply side the shale revolution in America, which has resulted in the USA becoming a leading oil producing country, is highly significant too. Increasing supply from this source is providing a significant buffer against rising tensions in the Middle East which threaten disruption. 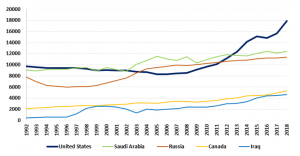 The USA’s shift to become a leading producer has ironically been aided by the members of the Organisation of Petroleum Exporting Countries (OPEC). After the financial crash OPEC cut oil production in a bid to achieve higher oil prices and in the process gave succour to the shale oil industry. The graph below shows this happening with shale production continuing to build despite crude oil prices trading in a lower price band since 2015.

The rise in US oil production has apparently broken the ability of OPEC to determine oil prices and oil price stability appears to be holding, for now. This positive view implies that disruption to the transit of oil through the Strait of Hormuz will not cause prices to ramp up. If this holds true inflationary pressures will remain contained giving the Trump administration greater latitude to continue its policy of enforcing economic sanctions on Iran.

Of course, it is impossible to know the future with certainty. What does seem to be changing though is Western foreign policy. The strategic value of oil in the Middle-East is declining with the rise of shale oil and the ongoing shift from fossil fuels to more sustainable sources of energy. This may facilitate the ability to confront rogue elements in a way that is less destabilising, but it is a dangerous game regardless.

Whilst all such scenarios are hypothetical, the backdrop to oil encapsulates perfectly the disruptive power of market forces in the changing game of power politics.